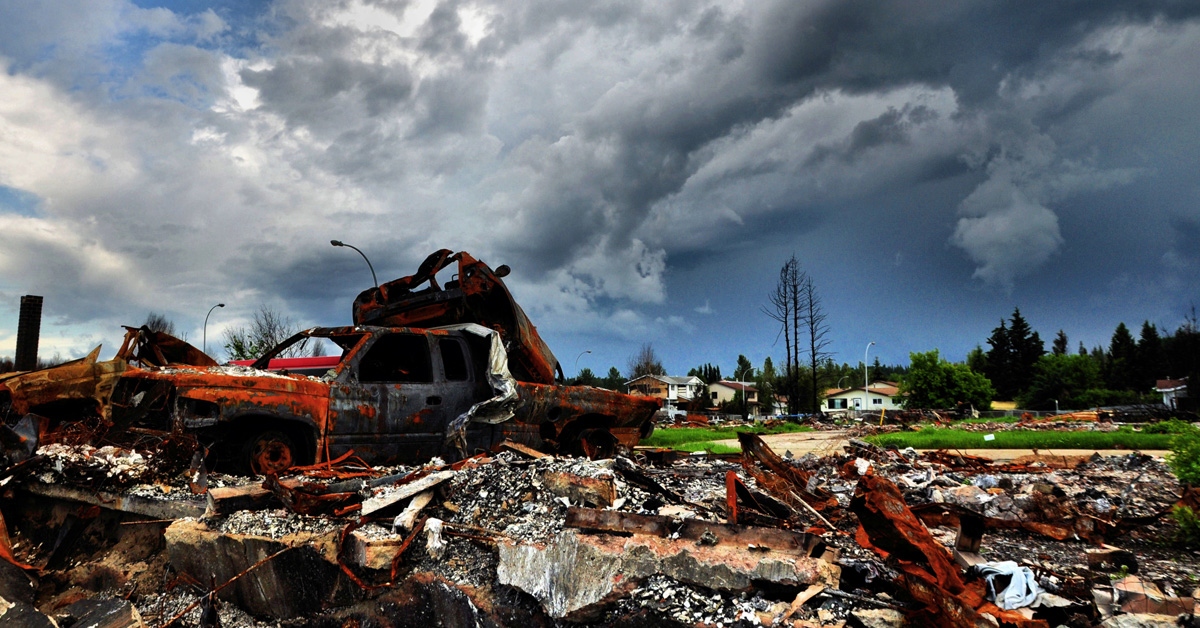 Rick was the Utilities Manager for the MD during the May 2011 wildfires.

This is an event that I do not want to discuss in detail, however it has been requested for reasons I believe in. I will try to be as accurate with dates and times as possible, but more so the events themselves and the actions of Municipal staff, focusing mainly on the Utilities Department, as that is where my effort was mainly spent.

The important fact to keep in mind is that during the period of May 14th and May 15th there was not one but five fires burning within the Municipality, three out of control and one within the Hamlet of Smith that by the efforts of the residents was contained and extinguished. If not for this, given the weather conditions, it is my opinion that the complete community would have been destroyed. Fire number three was burning out of control between the Hamlets of Chisholm and Flatbush. Fire number two was burning out of control heading toward the Hamlets of Wagner, Widewater and Canyon Creek. This fire was to reach into the heart of Widewater and Canyon Creek, indiscriminately incinerating a great number of homes and property. Fire number one ignited between the Mitsue industrial park and a subdivision named Poplar Lane within the Municipality, East of the Town of Slave Lake. This is the fire that destroyed a great deal of Poplar Lane and large portions of the Town of Slave Lake. Please picture and keep this situation in mind as I move on and also know that many of us have been with wild fire activities in the past.

Municipal employees began the evacuation process within the Mitsue industrial park on Saturday May 14th; as well the water pumping station was put on a 24 hour manned watch, the same with the Canyon Creek water treatment facility and the Smith water treatment facility, no evacuation for these individuals. Water production was increased past design parameters at Canyon Creek and Smith, which is where I was to facilitate this, in anticipation of the dragon at our doorstep.

The evacuation of residents of Poplar lane continued on May 15th, as fire number one refused to be held, as I mentioned the weather conditions were perfect for disaster, I had felt this sickening feeling in the past, it is indescribable I want not to elaborate. Sunday morning I was working at home laying fire line and preparing other fire suppression equipment in the event fire would break out close to home. Fires three and four had not ignited at this time. Residents of the communities of Wagner, Widewater and Canyon Creek whom had been on a two hour evacuation notice since the previous day were now given the order to evacuate. I was called to Slave Lake that afternoon, leaving my now terrified Wife at home alone as fire watch, keep in mind we live in a heavily forested area in a condition of perfect wild fire weather, having had one erupt only two miles away the previous year, saved only by 30 minutes due to quick response from SRD bombers.

Speed limits or your own safety do not enter into the equation at times such as this, for myself or any of the other person called onto the front lines. I drove through road blocks, past R.C.M.P. waving to stop and through smoke, flame and heat, not knowing as of yet what my duties would be. Upon arrival at the MD administration building I was ordered to report to the command center at the town hall in Slave Lake, to relieve a fellow staff member and report back to the MD events as they transpired. I was only on duty there for less than an hour and received a call from my Wife telling me the power was out, this means to me trees are down and there is a fire somewhere! I also know our local fire fighters are all in Slave Lake, I ask for her to drive the local power lines to verify. Power failure then occurred at the town hall prior to the fire chief giving an update indicating fire one would do whatever it wanted, additional fires has started in Smith, South of Chisholm and fire FIVE North of town. Municipal staff that had been at our office had now evacuated and were arriving at the town hall. I then left to fight fire at home not knowing the extent of the fire in Smith, so back through the flame and smoke. As I had mentioned, this had been quickly extinguished by local residents. Knowing what lay ahead with the fires at Slave and Canyon Creek, I sent my wife to safety in Westlock. Now comes the hard part of this recollection.

That evening and throughout the night fire ravaged Widewater and Canyon Creek as well as Slave Lake. From the start this department was in constant communication within its self and others, we all knew what the other was doing and where they were. Lyle Farris manned the Canyon Creek facility fighting fire and pumping water to supply suppression until the reservoir was empty, again I remind you electrical power was still down so no ability to produce more, the facility was dead! Lyle spent the remainder of the night extinguishing whatever flame he could tackle; his effort was aided by other Utility workers into the next day. Meanwhile some of the crew that were still on 24 hour watch whom had been protecting the only remaining producing facility at Smith, and rationing water for domestic use only now had to squeeze every ounce of production from that facility as it was now the only supply for emergency personal in Slave Lake. We had people sleeping on cement floors, in vehicles, on chairs for days. Some had not eaten anything substantial for days as well. There was no change of clothing for them and little water to wash. Some would say this did not happen! It most certainly did. Hell, I was there. We were forgotten for three days and all calls fell on deaf ears. Through all of this there was no complaint or lack of achievement. I will not forget the devotion given by all, and the ultimate sacrifice given by one; we watched in disbelief as his effort fell silent into the lake.

Electrical power was restored to Canyon Creek late Monday, and we were then able to start producing water – still 24 hour coverage for all but Mitsue. Even at double capacity producing 24 hours a day, it was not until Wednesday morning we were able to start flushing all the distribution lines, at which time seven bacteriological samples were collected and driven in to the provincial lab for analysis. Aspen regional health services in Athabasca were extremely helpful in supplying the results; all passed. Canyon Creek was now an additional supplier to the Town of Slave Lake, which took some pressure off of the smaller facility at Smith, "The Little Engine That Could."

I thank ALL of you involved in any role you played during this horrible memory, and am proud of what was accomplished in such a short period of time.