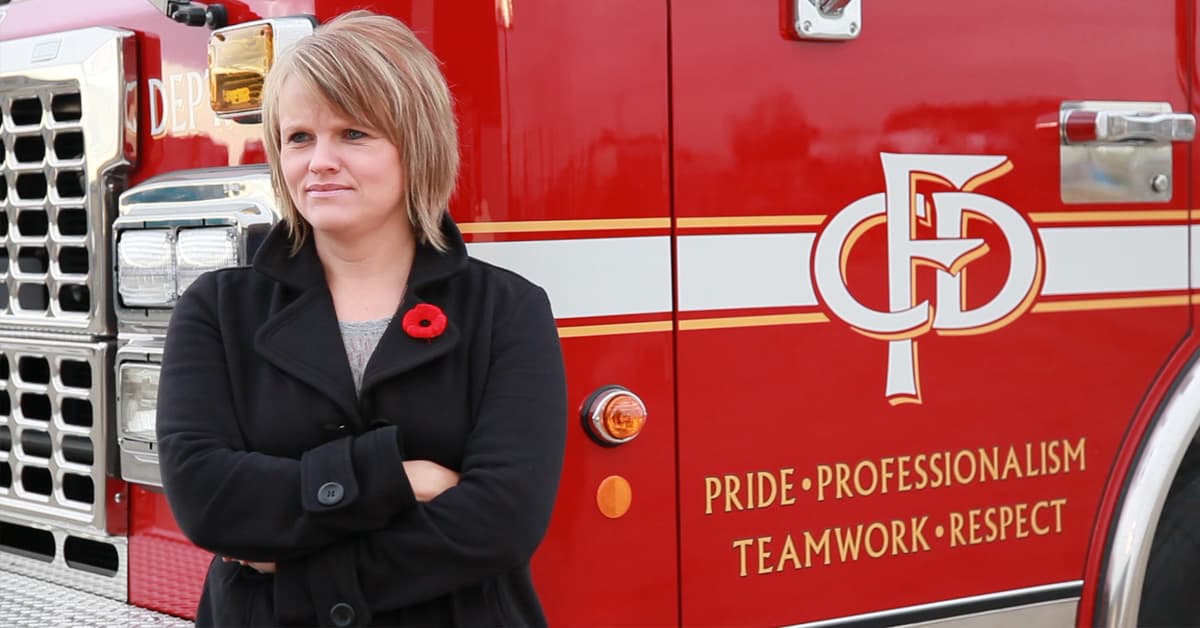 Kelly was the Human Resources Coordinator during the May 2011 wildfires.

On May 14, my husband and I were outside doing some yard work when we saw the first bomber fly over. It was incredibly windy out and I remember him saying "that's not good." After a few more bombers flew over, I decided to run in and check Facebook. To my surprise, there were already pictures posted. A fire was burning in the hills southwest of town. Instinctively I phoned the office and was surprised that the Reeve, several Councillors and our Chief Administrative Officer were all there. I was told the fire was getting pretty big, but SRD felt confident they could gain control due to swirling winds.

I made my way to the MD office around 5:00 to assist. On my way into town, I noticed a small plume of smoke across the flats to the east. At first I thought it was just smoke from the Mitsue Industrial Park, but this smoke was black and it was getting very big, very fast. By the time I got to the Hwy 88 and Hwy 2 intersection, that large billowing cloud looked like it was right along the highway just past our office. When I got to work, I told them about the second fire I saw.

Sustainable Resource Development (SRD) advised us that a fire had started near Mitsue Lake and it was growing rapidly. With additional office and transportation staff arriving, we began preparing to evacuate residents from the area. I remember us all huddled around some maps on the floor. We decided that the men would go door-to-door and start evacuating people closest to the fire, and we would start phoning people at the far end of the community. We made phone calls strictly on our memory of people who lived there, calling out names to each other and then asking the residents on the phone to advise their neighbors just in case we missed someone. Some people we called had no idea what was going on and others were already in action. I hated hearing the fear and panic in their voices. We were told that social services were setting up an evacuation center at the Northern Lakes College and asked everyone to at least go there to register. The RCMP, Fire Department and MD staff went house to house. I was very impressed on how fast the evacuation went and how soon everyone was back.

We received regular updates from SRD for the rest of the evening. Most of the resources from the Southshore fire had been moved to the Mitsue fire as it was threatening residences. Both fires were growing quickly. Each time our Chief Administrative Officer Allan Winarski gave us an update, I would post it on my Facebook status. I knew that my friends would be concerned about the smoke coming into town and two fires burning now; it was the least I could do to try to ease their uncertainty.

We learned that there were structures gone in Mitsue, most likely some residences. We issued a SOLE (State of Local Emergency) around 8pm. We were asked by SRD to put Bayer Road and the Southshore communities on 2 hour evacuation notice, meaning that residents need to be ready to leave within 2 hours if we order them to. It was being advertised on the radio but we phoned everyone on Bayer Road as they seemed more at risk. The prediction that first night was that the fire was headed north toward the Lesser Slave River. The Southshore fire had also grown considerably, thanks in part to resources being rerouted to attack the Mitsue Fire.

The morning of May 15 was extremely busy at the office. We were told the Southshore fire was large and out of control, and that SRD was in the process of determining a trigger point. Once the fire reached that point, we would receive the call to start evacuating residents. I prayed we would never get that call. But we did.

Just like Mitsue, we had no easy way to get in touch with everyone. Panic was setting in. I grabbed a phone book, told everyone to do the same and I started calling out a letter to each person. Once they were done phoning all those in their letter, they would ask me for a new one. Our message: "Evacuate now and come to the evacuation center in Slave Lake". Again, I hated hearing those voices on the other end of the line. We tried to remain strong and calm but we weren't. Fire was threatening two of our populated communities and had already taken some homes in one.

SRD requested that the MD and Town of Slave Lake merge EOCs so information could be shared more effectively. Before day's end our newly formed command center would relocate yet again to the Northern Lakes College once Slave Lake's EOC began to burn. On our way to join the Slave Lake EOC, the smoke from the Southshore fire looked horrible; the entire sky and was brown. It seemed like the wind was getting worse and not calming down like it should be at 3 in the afternoon.

At the new EOC I began helping our supervisor Judy with finance – a fundamental aspect of operations during the crisis. It was nothing like I expected, and before long we all found ourselves working on many different things at once. It was the most exciting work experience I've ever had, amid the most frightening, devastating and exhausting moments of my life.

I was very happy to finally send a Facebook status saying that many of the rumors were wrong; there was a hospital, schools, trees, stores and houses. But it was bad. The areas that had burned were completely destroyed, like nothing I'd ever seen before. The house and neighborhood we had raised our kids in for 15 years was no longer. It broke my heart. As I drove through the area (escorted) it reminded me of a graveyard in a horror movie.

In the days that followed the fire I worked alongside my MD colleagues at the new EOC. By then the Calgary Emergency Management Agency (CEMA) had taken over Incident Command. They kind of scared me, these men in suits, off in rooms, on phones giving orders. But within a day I realized they were just people like us, and just like us they were brought into a situation unlike anything they had ever experienced. They were trained professionals, they could get things done and organize people, and perhaps most importantly they weren't emotionally attached. It soon became apparent they needed us as much as we needed them. We were locals and we knew where everything was. Most importantly, we had contacts and knew how to get in touch with people.

The EOC housed command rooms for RCMP and EMS. There were up to 1500 emergency personnel in town working day and night. Utility companies like ATCO Gas, ATCO Electric and TELUS had brought tons of badly needed resources into town. Everyone worked together – and worked as hard as they could – to manage the disaster and meet the goals for the safe return of residents. SRD had the most staff in place in the region, and continued to fight fire from the air and on foot. I feel that they were the unsung heroes of this whole ordeal.

It has been a long journey both personally and professionally. My heart breaks every day for my friends who have lost their homes and all their belongings. Our lives and community has changed forever. There's anger, there's thankfulness, there are positives and of course there's the negative. It is such a great feeling to see everyone in temporary housing now and to see the recovery efforts starting; it has definitely raised community spirit.

At the MD, I don't think we have ever been as proud of each other as we were during the crisis. We never had the bond that we have now because of this horrible event. I have no doubt it will be difficult in the weeks and months to come, but I also have no doubt we will get through it.