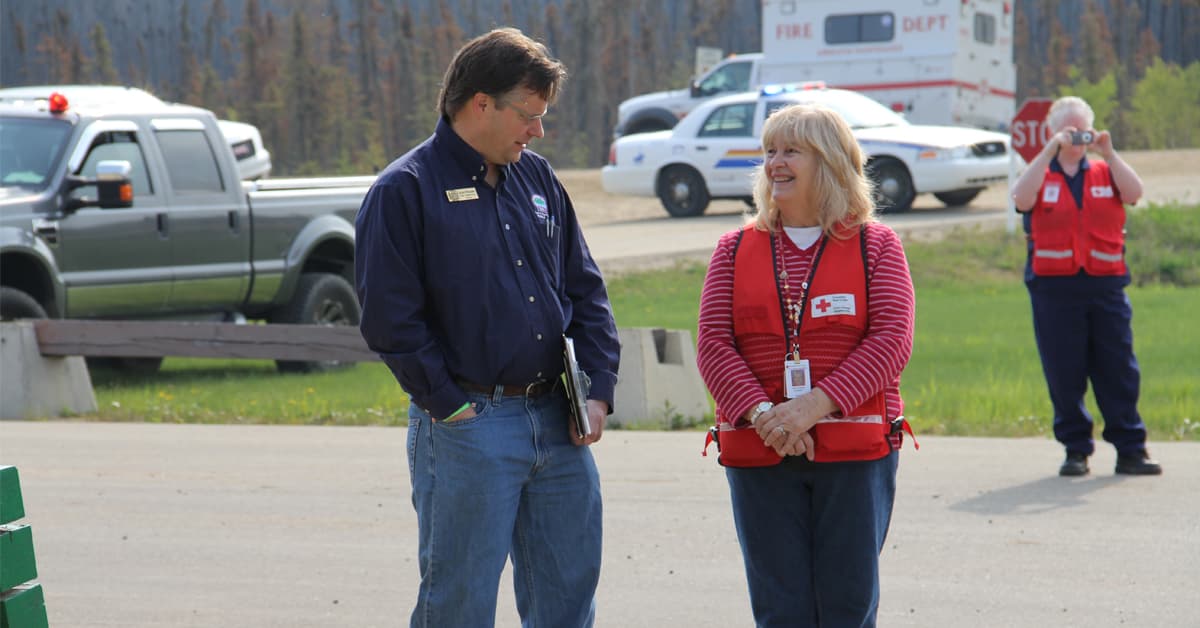 Allan was Chief Administrative Officer for the MD during the May 2011 wildfires.

Saturday afternoon I headed to the MD office after learning of the advance of the Grizzly Ridge Fire. Staff and Council started filtering in as the news spread. The worse conditions became, the more staff arrived. About 98 per cent of our people came to help – and stayed until the end. To a person, they were level-headed, efficient and vital to operations. People played interchangeable roles – anything they could do to help. Making arrangements to evacuate, rounding up gas and buses for people stuck in town, trying to confirm details, dealing with emergent issues. Any of the thousands of things that needed to be done.

During a situation like this, our office becomes the municipal Emergency Operations Centre (EOC), the Town of Slave Lake also runs an EOC, and both groups receive vital information from Sustainable Resource Development (SRD).

We received news of the second fire east of Poplar Lane, and within the hour we began evacuating people from the area. The next morning, we knew there were homes destroyed in Poplar Lane, but it sounded like it was a mop-up situation. Upon touring the area, I was struck by the precise application of the fire retardant that saved certain properties. On Sunday morning we were told the Grizzly Ridge Fire was still burning, and that SRD officials were working to determine a trigger point (a boundary that, if breached by fire, would necessitate evacuation). This point was reached around noon, so we began the process of evacuating residents in the Bayer Road, South Shore and Assineau areas.

A utility worker who was stationed at a road block across from our office came through the door around 4 pm. I'll never forget the look on his face when I asked him who was manning the barricade. He said "The fire's right there…I had to leave". It was at that time I realized we had to leave our office immediately so that our exit wasn't cut off. We made our way to the Slave Lake Emergency Operations Center and our two EOCs merged into one.

Before abandoning the MD office, we informed the Flatbush satellite office that it was now the seat of MD governance as we had effectively become refugees within the Town of Slave Lake. We were at the Slave Lake EOC for about an hour before it too was evacuated. The fire was deep in town and we were cut off on all sides. The realization that we were on our own produced a profound sense of loneliness. We collectively decided that the Northern Lakes College was our best option for our makeshift headquarters. As we left the Slave Lake EOC amid high winds and flying embers, the business district around us was rapidly being consumed.

We set up operations on the second floor of the college as best we could. We received word that a new fire may be headed to Marten Beach, and that another fire was burning near the community of Chisholm. Our initial concerns were to evacuate these communities, and to decide how best to get our residents safely out of the area. We were also connecting with provincial emergency authorities who were trying to coordinate logistics and arrange resources as quickly and efficiently as possible.

A lot happened in the first few days. Things came at us pretty fast and just didn't stop. I cannot begin to express my gratitude and pride in the resourcefulness of the MD employees and elected officials during this catastrophic event. Had we not had the strong working relationship before the fire, things could have easily run off the tracks at multiple points.